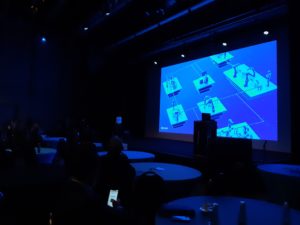 For the second time, Prague hosted the NEXT100 Symposium, the conference of the Global Arena Research Institute (GARI) bringing together the realms of technology, society, politics, economy, environment, and more. ​ The NEXT100 addresses how the social and computational sciences can come together to face our future’s greatest global and political challenges. Within this context, the RICAIP Project was introduced to the audience by Prof. Vladimír Mařík, Scientific Director of CIIRC CTU.

Recognising the vast potential for collaboration between the technical and social sciences, the Next 100 Symposium aims to provide a platform for transformative dialogue between those working with society’s most cutting-edge technology and those working in social scientific fields. The Next 100 Symposium is unique both in its concept and informal atmosphere as well as in the number of speakers and range of topics. The Czech Institute of Informatics, Robotics and Cybernetics of the Czech Technical University (CIIRC) joined the event to fully fulfill its mission: to create a space for interdisciplinary dialogue on how we can positively shape the future using new technologies.

This year, nearly 60 speakers from over 20 countries around the world presented trends in 15 disciplines of world science, technology, innovation and society. Cross-cutting discussions on today’s most pressing issues were arranged: from climate, through artificial intelligence to biomedicine, but also politics, economics, security and defense. The common denominator of all appearances was the search for a way to steer human efforts towards a sustainable and fair global future.

Within one of the main spotlight, prof. Vladimír Mařík focused on the importance of artificial intelligence for industrial companies that need it especially for productivity improvement. In this context, he introduced the emerging RICAIP center based on a completely new research concept of modern industrial production. The infrastructure, which is being developed both at CIIRC and at partner institutions DFKI, ZeMA or CEITEC BUT, is the basis for new partnerships between the private and academic spheres. The ETERNITIS pilot project is already proof of this. More than 40 leading research laboratories from 21 European countries after having collaborating for several months together prepared and submitted for further evaluation a project focused on artificial intelligence research in the field of intelligent robotics. It was CIIRC on the roots of RICAIP that led them as coordinator of the whole initiative.

Dr. Josef Urban, who leads AI & Reasoning at CIIRC, was the keynote speaker of the roundtable discussion where he presented the essence of a combination of learning and reasoning methods used in formal verification. Another CIIRC guest was prof. Holger Hoos of the Dutch Leiden University, an artificial intelligence expert and one of the founders of CLAIRE, the world’s largest association of research groups and institutes for artificial intelligence. Prof. Hoos pointed out to the audience that the greatest risk is not a strong artificial intelligence that gets out of control, but the incompetent use of weak AI.

Thanks to a truly interdisciplinary approach to science, CIIRC was able to win Dr. Martin Tolar, founder and director of Alzheon, a company that develops innovative medical procedures and medicines for neurodegenerative diseases in the United States. Tolar has been named one of the 100 most influential medicines in the world by Medicine Maker Power Lists. He is currently working on developing a drug for patients with Alzheimer’s disease based on individual genetic and biological information for targeted therapy with the greatest impact on patients. On the NEXT100 he outlined, among other things, the directions that open up possibilities for the application of artificial intelligence in medicine, especially in the area of clinical data evaluation.

In conjunction with the latest technologies, with their innovative and predatory charge and responsible dialogue on their impact on society and the economy, the organizers of GARI see one of the possible ways out of contemporary social and political apathy and mistrust. The conference also featured personalities such as Jim Balsillie, founder of Research in Motion (Blackberry), economist Jeffrey Sachs of the Columbia Earth Institute, Frederick Bordry, director of accelerator and technology at CERN, but also Jiří Drahoš, senator and former presidential candidate .

The Global Arena Research Institute (GARI) is an independent, impartial research organization. GARI uses advanced technologies to map globalization through large data access and digital ontology. Next 100 Symposium is a platform for discussion and agenda formation for the global arena. Creating a digital ontology of globalisation provides a working dialogue about how to translate crisis-driven language into future-oriented ideas on a global scale and a vision of the next one hundred years.