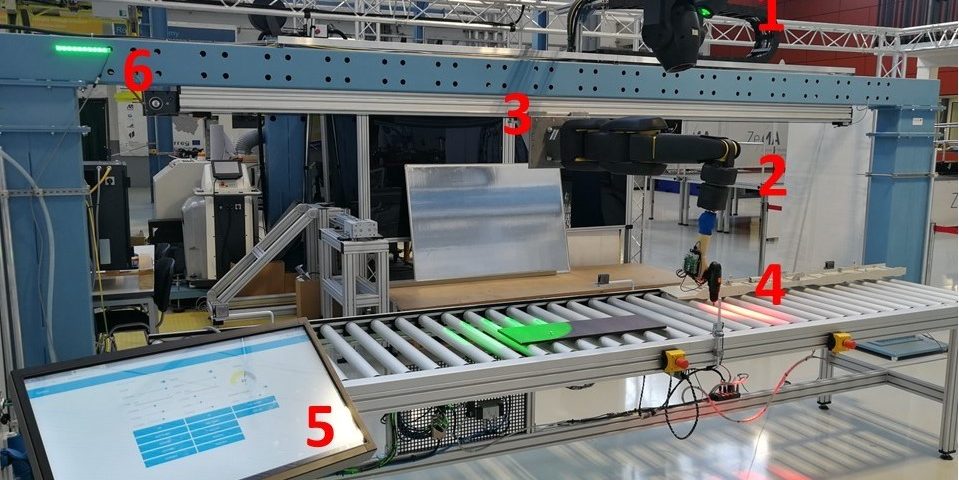 A central focus in the research area Human-Robot-Cooperation (HRC) is the mobility of robot systems. The mobility of an MRK-capable robot system means the rapid expansion of the robot workspace as well as the rapid setup of such systems. The systems currently available on the market have specific disadvantages with regard to these aspects. This is particularly true for linear axis systems, which are also usually heavily oversized and associated with high acquisition costs.

As part of the Robotix Academy, ZeMA set up an HRC robot with a 7th axis that meets the criteria of rapid sequential expansion of the robot workspace and simple restart of the system by using additional sensors. The development environment consists of a roller conveyor, a linear axis equipped with an HRC-capable robot, which is mounted at the front, and an external control unit.

More concrete, the scope of the demonstrator is to develop a prototype of a semi-automated physical human-robot cooperation (pHRC) station with a modular control concept which standardizes human robotic interfaces. The collaborating characteristics of the robot are conceptually transferred to a linear axis for workspace extension. This enables skill-based task sharing between human and robot in an extended workspace. Safety is considered through guaranteeing the stopping of the robot through the capacitive sensor skin when people or obstacles approach in range. The signal of the sensor skin is transmitted in parallel to the linear axis to set it into emergency stop status. The HRC station, presented in this paper, serves as a basis for further researches in the fields of pHRC workspace extension and a modular control concept. For first investigations, a drilling process is implemented.

In this demonstration, a handheld cordless drilling machine is retrofitted to be “Industry 4.0-Ready”. Additional assistance systems, such as “guide by spotlight” for example, are modular in design and integrated via standardized interfaces based on MQTT. For these reasons a simple integration, even in existing systems, is possible. The assistance systems support the exchange of information with humans, increase the acceptance between robots and humans. Due to the intuitive implementation of the human-machine-interaction (HMI), the resources are shifted from not seeing the robot as an “instrument” but as a “partner” within the framework of human-robot-cooperation.VISIT THE ZEMA FIELD LAB